“Can the knowledge deriving from reason even begin to compare with knowledge perceptible by sense? “ – Louis Aragon

Born in Paris on this date in 1897, Aragon was a poet, novelist and editor of the surrealist review Littérature.   In his lifetime (he died in 1982), he wrote some two dozen books of poetry and a dozen novels.  And his essays were widely published throughout Europe. 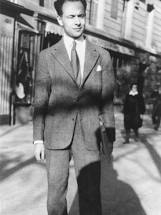 For Saturday’s Poem, here is Aragon’s,

In vain the winds pursue the azure’s griefs
Your eyes are brighter, even through a veil of tears,
And your eyes make the heavens jealous after a shower:
Glass is never so blue as it is when it breaks

The child who holds pictures before him for hours
Will strain his eyes less immoderately
When you stare from yours, I do not know if you lie:
One would think the rain were opening wild flowers

Do they hide lightning in that lavender
Where insects give in to their lusts?
I am caught in a net of falling stars
Like a sailor who dies at sea in the middle of August