“Writing is no dying art form in America because most published writers here accept the wisdom and the necessity of encouraging the talent that follows in their footsteps.” – Elizabeth George
I’ve written about George before – but she’s so eminently “quotable” that I can’t resist a few more nuggets of wisdom from her on her birthday (born this date in 1949).   A native of Ohio who earned her writing degrees in California, she has risen to prominence for her mysteries set in Great Britain and featuring Inspector Thomas Lynley.   The Inspector Lynley Series has been much celebrated on both the BBC and PBS.
A firm believer, as she notes above, in helping new writers find their footing, she said it upsets her that sometimes those who are established in the writing field feel writing is an innate talent.  “I find it both fascinating and disconcerting when I discover yet another person who believes that writing can't be taught.  Frankly, I don't understand this point of view,” she said.  “ … Craft can be taught. And writing is both an art and a craft.”
George said it is the job of the novelist to touch the reader.  “Whether it is literature or not is something that will be decided by the ages, not by me and not by a pack of critics around the globe.
“I try to create a challenge for myself in each book. 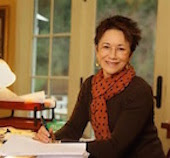 And sometimes, believe me, I just kick myself afterwards, and say, 'Why on earth did you ever attempt this, you idiot!' But I'm always better for the experience.”

Share A Writer’s Moment with a friend by clicking the g+1 button below.
Posted by A Writer's Moment by Dan Jorgensen at 5:47 AM