A Writer's Moment: 'The Only 24-Hour Art':   “The time to read is any time: no apparatus, no appointment of time and place, is necessary. It is the only art which can be practiced at ...
Posted by A Writer's Moment by Dan Jorgensen at 6:22 AM No comments:

“The time to read is any time: no apparatus, no appointment of time and place, is necessary. It is the only art which can be practiced at any hour of the day or night, whenever the time and inclination comes, that is your time for reading; in joy or sorrow, health or illness.” – Holbrook Jackson

A native of Liverpool, England, George “Holbrook” Jackson was born on this date in 1874 and while he initially followed a path toward a business career, he veered off sharply in his mid-20s and followed a new path toward editing and writing.  Ultimately, he earned the reputation as one of Britain’s – and perhaps the world’ for that matter – leading bibliophiles.

Starting with his 1899 book on the works of Edward Fitzgerald, he wrote some 50 books about books, book collecting, bibliographies and typography.  And, as a journalist, he also authored hundreds of essays on those topics and co-founded (with famed poet Ralph Hodgson and designer Claud Lovat Fraser) the Flying Fame Press in 1913.

Jackson also held an editorial post on T. P. O'Connor’s T.P.'s Weekly, a newspaper with a strong literary emphasis. He took over as editor in 1914, later purchasing the publication and converting it into his own literary magazine.  Jackson, who died in 1948, was lauded for his extensive library, often used by other writers for research and reference.  “Your library,” Jackson once said,  “is your portrait.” 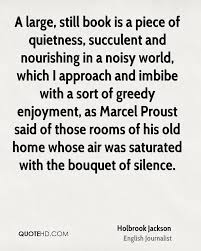