“Publishers have published women's fiction into a corner, and now we are all trying to punch our way out of it. We just have to write the best books we possibly can and hope that, once the pink covers and Bridget Jones have faded from memory, we might finally be allowed just to be called writers.” – Lisa Jewell
Born on July 19, 1968, Jewell is one of Britain’s most popular writers – particularly of “comedy romance” – and basically got into writing on a dare.  A fashion designer at the time, Jewell accepted a challenge from a friend to write 3 chapters of a novel in exchange for dinner at her favorite restaurant. Those chapters eventually were developed into Ralph's Party, which became the UK's bestselling debut novel in 1999.

Since then she has written bestseller after bestseller, including Thirtynothing, After The Party (a sequel to Ralph's Party) and most recently Then She Was Gone.  To date she has authored 15 novels and a number of essays and short stories.   The mother of two “very busy” girls, she noted of her writing style that, “I don't really get into a writing routine until March or April, when I'll write a few hundred words a day, often in a cafe in the morning after the school run.” 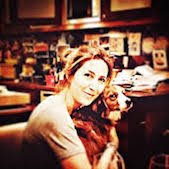 “I write in cafes, never at home. I cannot focus at home (and) am forever getting off my chair to do other things. In a cafe, I have to sit still, or I'll look a bit unhinged.”

Share A Writer’s Moment with a friend by clicking the g+1 button below
Posted by A Writer's Moment by Dan Jorgensen at 5:33 AM