Born on April 20, 1953, British novelist, journalist and broadcaster Faulks is best known for his historical novels set in France – The Girl at the Lion d'Or, Birdsong and Charlotte Gray. He has also published such contemporary novels as A Week in December  and the James Bond continuation novel, Devil May Care for which he won the British Book Awards “Popular Fiction Award.”

Also honored by the British Crown for his lifetime contributions to English Literature, he has had the rare accolade of being tabbed as “popular and literary at the same time.” English theatre, film and television director Trevor Nunn called Faulks' novel, Human Traces "A masterpiece, one of the great novels of this or any other century." 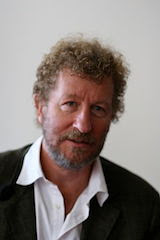 A leading advocate for “read before you write,” Faulks advises writers to be strong readers first.   “I don't know how you can understand other people or yourself if you haven't read a lot of books. I just don't think you're equipped to deal with the demands and decisions of life, particularly in your dealings with other people.”

Posted by A Writer's Moment by Dan Jorgensen at 6:20 AM