'Exploring Where Words Come From'

“I think the reason I'm a writer is because first, I was a reader. I loved to read. I read a lot of adventure stories and mystery books, and I have wonderful memories of my mom reading picture books aloud to me. I learned that words are powerful.” –  Andrew Clements


Born May 29, 1949 Clements has written dozens of children's books, beginning with his novel Frindle, which won the award writers most care about – the award of favorable public opinion from those you hope will read your book.  In Clements’ case, of course, that was school kids, who voted overwhelmingly that his book was the one they all liked best.

Not honored by the writing community at the time, it came back 20 years later to win the 2016 Phoenix Award as “the best book that did not win a major award when it was published in 1996.”  Frindle gives us a different way to look at dictionaries and how words are developed and used, and also one of the most interesting explanations I’ve read: 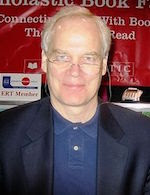 – are concerned.  That, and his ability to “get into the personnas” that he is creating.  For a terrific read (and don’t be embarrassed about reading a kids’ book), read his compelling Things Not Seen.  It will open your eyes (no pun intended).

“Part of being a fiction writer is being able to imagine how someone else is thinking and feeling,” he said.  “I think I've always been good at that.”

Posted by A Writer's Moment by Dan Jorgensen at 7:06 AM