'Be The Candle, Or Be The Mirror'

“There are two ways of spreading light: to be the candle or the mirror that reflects it.” – Edith Wharton

Born on this day in 1862, Wharton grew up in New York City and began writing poetry and fiction as a young girl. She even attempted to write a novel at age 11 and had her first work published by age 15.

Despite that, her Upper Crust Society family discouraged her from writing and publishing because they didn’t think it was either “ladylike” or worthwhile.   But after marrying, she pursued it anyway and went on to publish 16 novels, dozens of novellas, 85 short stories, 3 books of poetry, and 9 nonfiction books.  In 1921 she won the Pulitzer Prize for The Age of Innocence, and in 1927, 1928 and 1930 she was a finalist for the Nobel Prize. 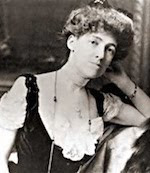 Her novella Ethan Frome and her novel House of Mirth are widely studied in American literature classes in high schools, colleges and universities around the world, both for their realism and their portrayal of the times and places in which she lived.

Wharton loved life and writing about it and said it kept her young and vibrant.  “Life is always a tightrope or a feather bed,” she said.   “Give me the tightrope.”

Posted by A Writer's Moment by Dan Jorgensen at 8:40 AM