'An outsider passing through'

“I like the condition of being an outsider in writing, just passing through.” – Barry Unsworth

Unsworth was an English writer known for his historical fiction. He published 17 novels, and was shortlisted for the prestigious Booker Prize three times, winning once for Sacred Hunger. Born on this date in 1930, Unsworth did not start to write historical fiction until his sixth novel, Pascali's Island, the first of his Booker Prize nominees.

While he told great yarns, he was sometimes criticized for taking "poetic license," but he said it was all about the story and not the actual history he was choosing for his focus.  “I’m not a biographer,” he said.  “I’m a novelist.” 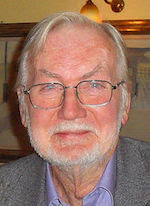 “Writers of historical fiction are not under the same obligation as historians to find evidence for the statements they make,” Unsworth said.   “I believe, for us it is sufficient if what we say can't be disproved or shown to be false.”

Posted by A Writer's Moment by Dan Jorgensen at 5:53 AM