Press on and keep trying

“Rejection is not a reason to give up.  Sometimes you'll do something that you really like and no one else does. You'll feel terrible, but you've just got to press on and keep trying. If you like doing it and keep working at it, then someday you will succeed.” – Norman Bridwell

Writers often receive rejections, and Bridwell should know.  The artist-author of the phenomenally successful Clifford the Big Red Dog series was told he had no artistic talent and his stories were too schmaltzy.  His first book, simply named Clifford the Big Red Dog, was rejected by the first 9 publishers to which he submitted it.  But, instead of throwing in the towel, he tried a 10th and the rest, as they say…

Bridwell, who was born in 1928 and died 3 years ago this month, said “Clifford” was supposed to be called “Tiny.”  But Bridwell’s wife Norma said that name was “stupid.”  As any writer knows, listen to your spouse or partner.  Norma liked the name Clifford.  As for Clifford’s friend Emily Elizabeth, that was a no-brainer.  It was the name of their daughter, to whom Norman had been conveying his Clifford story in the first place. 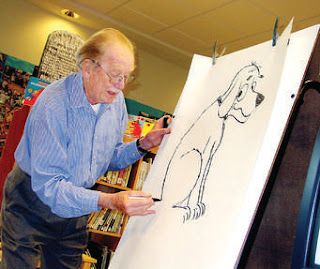 The book became the anchor of a writing empire with 40-some books printed in 65 countries and selling more than 130 million copies plus an animated television series still loved by children everywhere.  Clifford actually embodies his creator, a gentle man with a sense of humor who wanted to share values he hoped children would embrace – kindness, compassion, helpfulness, and gratitude.
And “stick-to-it-iveness.”

Share A Writer’s Moment with a friend by clicking the g+1 button below.
Posted by A Writer's Moment by Dan Jorgensen at 6:29 AM