More than 'just a story'

“Stories are really important to people and can really change the way they understand, and even live, their lives. As such, I don't agree much with people who say, 'Calm down, it's just a story.’” – Tim Pratt
Born on this date in 1968, Pratt is a Senior Editor at Locus Magazine and primarily a writer of science fiction and fantasy – both short stories novels.  He won the prestigious Hugo Award in the “Best Short Story” category for his tale “Impossible Dreams” and has authored of 19 novels and 4 short story collections.   He's been a frequent finalist for most major awards in the SciFi-Fantasy categories.  His most recent novel (written as T.A. Pratt) is 2017’s Closing Doors, although it’s rumored a new one is nearing completion. 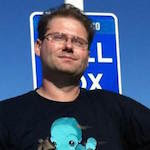 A native of North Carolina, where he studied English at Appalachian State University, Pratt currently makes his home in northern California.    A frequent presenter at Writer’s conferences and workshops, Pratt said he “loves” researching for his books and stories, and tries to immerse himself into whatever era or area he’s writing about by reading works done about that place and time.

“When I was working on a Victorian-era novel,” he said, “to get in the mood, I read several historical novels set in approximately the same period and place, and (found that I) really enjoyed the detective novels of John Dickson Carr.”

Share A Writers Moment with a friend by clicking the g+1 button below
Posted by A Writer's Moment by Dan Jorgensen at 6:43 AM