While Disney – born in Chicago on this day in 1901 – was primarily known as a cartoonist and business mogul, he also was a terrific writer and had an uncanny ability to recognize and adapt others’ writing into the many movies his studio produced.  By the time of his death, at the relatively young age of 65, Disney had won 22 Academy Awards (nominated an astounding 59 times) and 4 honorary Academy Awards for his work.  He also won 7 Emmys for his television productions. 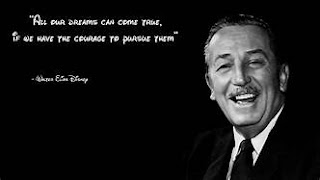 “Life is composed of lights and shadows and we would be untruthful, insincere and saccharine if we tried to pretend there were no shadows,” Disney once said, when asked why he sometimes created characters and dialogue not always as upbeat and “happy” as his early cartoon work. “I would rather entertain and hope that people learned something than educate people and hope they were entertained.“

Share A Writers Moment with a friend by clicking the g+1 button below
Posted by A Writer's Moment by Dan Jorgensen at 5:52 AM