“Sometimes when I'm talking, my words can't keep up with my thoughts. I wonder why we think faster than we speak. Probably so we can think twice.” – Bill Watterson
When Watterson was creating names for the characters in his award-winning comic strip, Calvin and Hobbes, he supposedly decided upon Calvin (after the Protestant reformer John Calvin) and Hobbes (after the social philosopher Thomas Hobbes) as a sort-of tip of the hat to the Political Science Department at Kenyon College in Ohio, where he studied political science.

In The Complete Calvin And Hobbes – of which I am a proud owner – Watterson stated that Calvin is named for "a 16th-century theologian who believed in predestination,” and Hobbes for "a 17th-century philosopher with a dim view of human nature."  Either way the words he wrote for the wise little boy with a talking stuffed tiger as his best friend stand the test of time – something every writer and artist hopes his or her work will achieve.

Born in July of 1958, Watterson created Calvin and Hobbes after first trying his hand at political cartooning.   He said he incorporated elements of his life, interests, beliefs and values into his work—for example, his hobby as a cyclist, and memories of his father's speeches about "building character."  For his efforts he has been awarded virtually every major prize in cartooning, often writing thoughtful and provocative statements in the process. 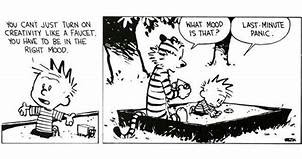 He stopped his comic strip when he felt it was becoming too commercialized and has focused mostly on art since 2000.  But, after being honored with an international prize for his life’s work in 2014, he says he has many things left to do, including some writing.  “God put me on this earth to accomplish a certain number of things,” he said.  “Right now, I am so far behind that I will never die.”


Share A Writer’s Moment with a friend at http://writersmoment.blogspot.com

Posted by A Writer's Moment by Dan Jorgensen at 8:36 AM