'Writing . . . Requires (both) Discipline and Commitment'

“The most important lesson my parents taught me is that writing is a job, one that requires discipline and commitment. Most of the time it's a fun job, a wonderful job, but sometimes it isn't, and those are the days that test you.” –  Jesse Kellerman

Kellerman, who celebrated his 43rd birthday this week, is a Los Angeles native and oldest son of bestselling mystery novelists Faye Kellerman and Jonathan Kellerman.  While he studied psychology at Harvard and playwriting at Brandeis, it didn’t take long for him to gravitate to “the family business,” and since the arrival of his first novel in 2006 (Sunstroke) he has had 5 bestsellers of his own.

“All my books deal with the effect of intent upon action, how our understanding of good and evil depends heavily on context,” he said.

He has collaborated with his father on several books, led by 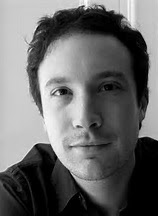 The Golem of Hollywood.  The psycho-suspense thriller combines Jonathan 's affinity for police procedures and Jesse 's use of unusual psychological suspense in a hunt for a murderer linked to a Jewish legend.

“All writers start out mimicking other writers. I've never relinquished that. I have a good ear for speech and writing patterns.”

Posted by A Writer's Moment by Dan Jorgensen at 6:47 AM