‘A Talent For It’

English writer Jacques, best known for his Redwall series, was born in Liverpool on June 15, 1939 and started reading early, devouring everything from novels like Kidnapped to the Wind in the Willows books.  By age 10 his vivid imagination combined with poring over books about animals led to that writing experience (noted above) which defined his writing life. 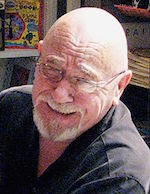 Jacques’ books were among the earliest converted into audio versions, and he was deeply involved as the lead characters while enlisting his sons and others to voice his Redwall inhabitants, many based on people he has encountered.  “I am a people watcher and I have a very good memory,” he said.

Posted by A Writer's Moment by Dan Jorgensen at 2:43 PM