'The written word is everything'

"When the poet makes his perfect selection of a word, he is endowing the word with life.” – John Drinkwater

English poet and dramatist Drinkwater, born on this date in 1882, started writing poetry in the early 1900s but didn’t have his first writing success until 1918 when he switched to drama and penned a play about an American.  Abraham Lincoln was not only popular on the stage, but also spawned a big hit as a movie in the mid-1920s.
That piece opened the door for Drinkwater to become a leading playwright about famous people, including popular shows about Mary Stuart and Oliver Cromwell. 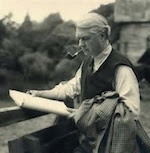 Once established as a successful writer, he published the first volume of his Collected Poems in 1923 and also compiled anthologies of his own works and other young writers of the time.  And, he wrote literary criticism for several newspapers and magazines before taking over management of the Birmingham Repertory Theatre.  There, he also became a popular recording artist of spoken word pieces and was still a rising star when he died suddenly in 1937.

Despite his broadcasting successes, he remained faithful to writing as a primary form of expression.   “The written word,” he said solemnly,  “is everything.”

Posted by A Writer's Moment by Dan Jorgensen at 5:45 AM