“Writing is not a matter of choice. Writers have to write. It is somehow in their temperament, in the blood, in tradition.” – N. Scott Momaday


Born in Lawton, OK, on this date in 1934, Momaday is a Kiowa novelist, short story writer, essayist, and poet and winner of the Pulitzer Prize in fiction for his novel House Made of Dawn, the first major work of what’s been termed the Native American Renaissance.  His follow-up work The Way to Rainy Mountain blended folklore with memoir about how the Kiowa came from Montana to Oklahoma.

For his celebration and preservation of Native American oral and art traditions, Momaday received the National Medal of Arts in 2007.    A fellow of the American Academy of Arts and Sciences, he has been awarded 20 honorary doctorate degrees from colleges and universities across America.

Also an acclaimed watercolor artist, Momaday designed and illustrated the mixed media book In The Bear’s House and has been lauded for his attention to detail about the land.  “I am interested in the way that we look at a given landscape and take possession of it in our blood and brain,” he said. 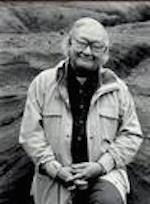 “None of us lives apart from the land entirely; such an isolation is unimaginable.”

Momaday has also written and illustrated a number of children’s books and says he loves portraying the stories of the Native people and sharing their traditions.   “Indians are marvelous storytellers,” he said.  “In some ways, that oral tradition is even stronger than the written tradition.”

Share A Writer’s Moment with a friend by clicking the g+1 button below.
Posted by A Writer's Moment by Dan Jorgensen at 5:14 AM