Ink Shared in Words and Pictures

“A newspaper is lumber made malleable. It is ink made into words and pictures. It is conceived, born, grows up and dies of old age in a day.” – Jim Bishop
Born in Jersey City, NJ, on this date in 1907, Bishop dropped out of school after 8th grade, then studied typing and shorthand on his own in hopes of becoming a journalist.  In 1929, he was hired as a copy boy at the New York Daily News, leading to a nearly 50-year career in newspapers and magazines. 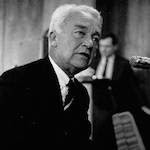 When not writing journalistically, Bishop began working on biographies and ultimately published half-a-dozen well-received books, including the bestselling The Day Lincoln Was Shot, a book that took him 24 years to complete but ultimately sold 3 million-plus copies.  The book has been re-published in two dozen languages and made into two television specials and a feature-length movie.

Bishop also was a syndicated political columnist and book reviewer and critic, although the latter role concerned him.  “A good writer is not, per se, a good book critic. No more so than a good drunk is automatically a good bartender.”

Share A Writer’s Moment with a friend at http://writersmoment.blogspot.com
Posted by A Writer's Moment by Dan Jorgensen at 6:01 AM