“A young musician plays scales in his room and only bores his family. A beginning writer, on the other hand, sometimes has the misfortune of actually getting into print.” 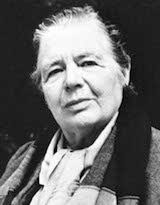 Yourcenar – born Marguerite Antoinette Jeanne Marie Ghislaine Cleenewerck de Crayencour in Brussels, Belgium on this date – was a novelist and essayist who spent many years in France and became a US citizen in 1947.  Winner of the Prix Femina and the Erasmus Prize, she was the first woman elected to the prestigious Académie française in 1980.

While she wrote extensively, she is best known for her novels Alexis and Memoirs of Hadrian, which she wrote on-and-off for over a decade.  Hadrian met with great critical acclaim, cementing Yourcenar’s writing legacy. In the novel, she recreated the life and death of one of the great rulers of the ancient world, the Roman emperor Hadrian.  The Emperor meditates on his past, describing his triumphs and his failures, his love for his son Antonius, and his philosophy.  The novel has become a modern classic.

“Every life is punctuated by deaths and departures, and each one causes great suffering that it is better to endure rather than forgo the pleasure of having known the person who has passed away,” she wrote.  “Somehow our world rebuilds itself after every death, and in any case we know that none of us will last forever. So you might say that life and death lead us by the hand, firmly but tenderly.”

Posted by A Writer's Moment by Dan Jorgensen at 6:54 AM