Writers transform: they throw a hand grenade into the notion of reality that people carry around in their heads. That's very dangerous, very destructive, but not to do it means you are satisfied with the status quo - and that's a kind of danger as well, because a kind of violence is already being perpetuated.” –  John Edgar Wideman

Born on this date in 1941, Wideman grew up in Pittsburgh, PA, and much of his writing is set there, especially in the Homewood neighborhood of the East End. He graduated from Pittsburgh's Peabody High School, attended the University of Pennsylvania and earned All-Ivy League basketball honors as a forward while also studying English.

While he says sports was his “main” thing, he not only enjoyed writing but became one of America’s best, starting while studying under a Rhodes Scholarship at Oxford University – just the second African-American to be selected for a Rhodes at the time.  Also a graduate of the prestigious Iowa Writers’ Workshop, he combined luminous writing and teaching careers for many years at Brown University.

I was drawn to Wideman’s writing through his amazing The Cattle Killing, a novel for which he won the James Fenimore Cooper Prize for Best Historical Fiction.  He’s also won the prestigious PEN/Faulkner and American Book Awards for his novel Philadelphia Fire. and been a National Book Award finalist for his memoir Fatheralong. 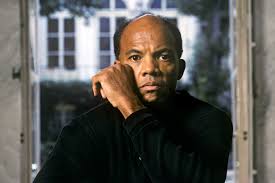 “I always liked to write and had fun writing, but I didn't have any pretensions about being a writer,” the modest Wideman said.   “I liked to read and liked to putz around and write little stories or poems, but my thing was sports; basketball.”  With a few slam dunks in the literary world along the way.

Posted by A Writer's Moment by Dan Jorgensen at 6:26 AM