Those 'Labyrinthe Corridors of Knowledge'

“Andrew Carnegie loved libraries; he knew their importance to an educated society and as anchors to our communities. And so, just as some loyal baseball fans travel to attend games at all 30 major league stadiums, over the last decade or so, I have slowly, casually, visited Carnegie libraries whenever I am on the road.” – Sam Weller

An engaging and much sought-after speaker – especially about longtime Science Fiction writer Ray Bradbury – Weller is on the road often.  Author of the award-winning The Bradbury Chronicles: The Life of Ray Bradbury, he is a frequent lecturer (nearly 400 talks) on Bradbury’s life and legacy.  His 2014 book Ray Bradbury: The Last Interview: And Other Conversations recounts Bradbury's influences, creative processes, and love for writing and reading.

Weller, who celebrates his 50th birthday today, is native of Illinois and a faculty member at Columbia College, Chicago.   The one-time Midwest Correspondent for Publishers Weekly, his personal essays have appeared in the Paris Review, on National Public Radio’s All Things Considered, and in Slate magazine. His short fiction can be found in numerous books, anthologies, literary journals, and magazines, and he’s now at work on his own fantasy-style novel. 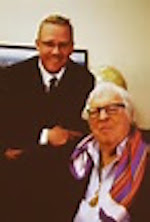 Sam Weller – and with Ray Bradbury
It’s in libraries that Weller often finds inspiration, advising all to enjoy visiting a library instead of just searching on line.   “Browsing for books with a mouse and screen is not nearly as joyful an act as wandering the stacks and getting lost in the labyrinthine corridors of knowledge,” he said.  “The best libraries are places of imagination, education and community. The best libraries have mystery to them.”

Share A Writer’s Moment with a friend by clicking the g+1 button below.
Posted by A Writer's Moment by Dan Jorgensen at 4:31 AM