“There's nothing worse than sitting down to write a novel and saying, 'Well, okay, today I'm going to do something of high artistic worth.'” – Douglas Adams

When I decided to quote Adams, who was born in England on this date in 1952, I first thought about using his quote about Thursdays (this being Thursday, after all).  He said:,  ”This must be Thursday. I never could get the hang of Thursdays.”  But the novel quote was hard to ignore.

Author, screenwriter, essayist, humorist, satirist and dramatist, Adams wrote the massively successful The Hitchhiker's Guide to the Galaxy, which originated in 1978 as a BBC radio comedy.  Ultimately it was rewritten into what he termed a "trilogy" of five books that sold more than 15 million copies in his lifetime alone (he died of a heart attack in 2001).

Adams also was a founder and director of The Digital Village, a media and Internet company, and created the award-winning adventure game Starship Titanic. 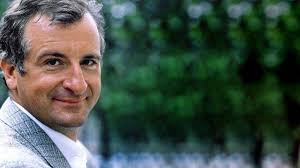 An environmental activist, he campaigned on behalf of endangered species and donated many of his royalties to that effort.

Posted by A Writer's Moment by Dan Jorgensen at 6:20 AM