For that 'starting point,' choose wisely

“What's so hard about that first sentence is that you're stuck with it. Everything else is going to flow out of that sentence. And by the time you've laid down the first two sentences, your options are all gone.” – Joan Didion

Joan Didion, born 81 years ago today, has been called a consummate writer and litarist, even though writing was not on her radar screen in her early years.  “I wrote stories as a little girl, but I didn’t want to be a writer,” she said.  “I wanted to be an actress.  I didn’t realize then that it’s the same impulse.  It’s make-believe.  It’s performance.“

Born and raised in Sacramento, CA, she got into her writing career “unintentionally.”
As a senior at UC-Berkeley she entered an essay-writing contest for Vogue magazine (on a dare) and 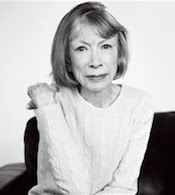 won the national top award – a job after graduation at the magazine.

In just two years at Vogue, Didion worked her way up from promotional copywriter to associate feature editor, and wrote her first novel, Run, River, which was published in 1963. She also met and married writer John Gregory Dunne, beginning both a lifelong romance and a lifelong writing partnership of sorts.  With Dunne, Didion co-wrote a number of screenplays, including an adaptation of her novel Play It As It Lays and the biography of journalist Jessica Savitch Up Close & Personal.

Her novel A Book of Common Prayer was widely lauded, but her most celebrated work was her heart-wrenching non-fiction book The Year of Magical Thinking, which won the National Book Award.  It chronicles the year of her husband’s death and her daughter’s battle with cancer.  The book has been called a masterpiece of two genres – memoir and investigative journalism.

She believes that the difference between the process of fiction and nonfiction is the element of discovery that takes place in nonfiction. This happens not during the writing, but during the research.

“Writing nonfiction is more like sculpture, a matter of shaping the research into the finished thing. Novels are like paintings, specifically watercolors. Every stroke you put down you have to go with. Of course you can rewrite, but the original strokes are still there in the texture of the thing.”

Share A Writer’s Moment with a friend by clicking the g+1 button below.

Posted by A Writer's Moment by Dan Jorgensen at 8:36 AM