The 'right word at the right time'

“When I need to know the meaning of a word, I look it up in a dictionary.” – William Safire

Born on this date in 1929, just days after the Great Stockmarket Crash, Safire grew up in the turmoil of the 1930s to become one of America’s best-known authors, columnists and journalists.  He also was an off-and-on speechwriter for President Nixon and Vice President Agnew, including penning the famous Agnew line describing those opposing their policies as “Nattering Nabobs of Negativism.”

A stickler for language uses and demands, he was perhaps best known as a long-time syndicated political columnist for the New York Times and the author of "On Language" in the Sunday New York Times Magazine, a column on new or unusual usages, and other language-related topics that he wrote right up until his death in 2009.  He also is the author of The Right Word in the Right Place at the Right Time.

A two-time Pulitzer Prize winner, he disdained fellow journalists and writers who used what he termed “insiderisms” to try to attract or dazzle readers.  “Do not be taken in by 'insiderisms,’” he once noted.  “Fledgling columnists, eager to impress readers with their grasp of journalistic jargon, are drawn to such arcane spellings as 'lede.'  I say, ‘Where they lede, do not follow.’”

Lede, by the way, is the longtime journalistic term for the “opening” of a story, supposedly containing all the key or important information needed. Safire always delighted in adding a key “nugget” of info. later in his stories – “just to keep the readers on their toes.” 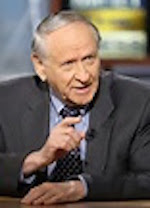 Safire on “Meet The Press”
As a native New Yorker who revered the artistic scene of the Big Apple, he also was a longtime supporter for and writer about the arts both by and for the public.   “One challenge to the arts in America,” he encouraged,  “is the need to make the arts, especially the classic masterpieces, accessible and relevant to today's audience.”

Share A Writer’s Moment with a friend by clicking g+1 below.
Posted by A Writer's Moment by Dan Jorgensen at 5:56 AM