Seeking out the answers

“I don't pretend we have all the answers. But the questions are certainly worth thinking about.”  – Arthur C. Clarke

Clarke, a native of Great Britain who lived 60 years in Sri Lanka, was born on this date in 1917.  He is perhaps most famous for co-writing the screenplay for the movie 2001: A Space Odyssey, widely considered one of the most influential films of all time.    His other science fiction writings earned him a number of Hugo and Nebula awards, which along with a large readership made him one of the towering figures of science fiction.

Clarke started writing as a journalist, focusing on science writing.  He was a lifelong proponent of space travel and a futurist of uncanny ability.  He also was one of the early “pushers” for nations to “get into that business.”  In 1934, while still a teenager, he joined the British Interplanetary Society, and as early as1945, he proposed a satellite communication system remarkably similar to the one we all use today.

He wrote over a dozen books about space and space travel proposing ideas that have become reality in today’s scientific world.  Those books along with his myriad essays in popular and scientific journals and magazines earned him the moniker “Prophet of the Space Age.” “Politicians should read science fiction, not westerns and detective stories,” he once said.  “Then maybe we’d get some things done.” 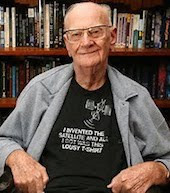 Arthur C. Clarke was 90
when he died in 2008.  His shirt reads:  "I invented the satellite and all I got was this lousy t-shirt"

Share A Writer’s Moment with a friend by clicking g+1 below.
Posted by A Writer's Moment by Dan Jorgensen at 5:45 AM