Lovin' those words ... and songs

‘Tis the season … to hear the terrific voice and words of Brenda Lee as one of the all-time biggest holiday hit songs “Rockin’ Around The Christmas Tree”  makes its annual appearance.   I grew up listening the Brenda Lee’s songs – both on the radio and from my mother who didn’t hesitate to “rock out” herself while bopping around the kitchen and singing them – especially the wonderful “I’m Sorry,” which Brenda wrote at age 15.   Her Christmas song, by the way, was recorded when she was just 13, hard to fathom when you hear her big booming voice.  It was written by Johnny Marks, who also wrote "Rudolph the Red-Nosed Reindeer" and "Holly, Jolly Christmas."

Lee was a child prodigy, appearing on national television by the age of 10, and making her first recordings for Decca at age 11 (in 1956). Her first few Decca singles, in fact, make a pretty fair bid for the best preteen rock & roll performances this side of Michael Jackson.  Between 1960 and 1962 she had a remarkable 9 Top Ten hit songs, most of which she wrote herself. 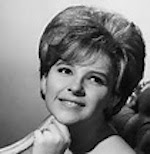 Brenda in 1960 …. and at a recent Grammy Awards ceremony

Still singing and writing both music and memoir-type pieces, she celebrates her 71st birthday today and said “I don’t think anyone ever gets tired of well-written, well-crafted songs.  (And) I still sing because I love the sound of applause.  It’s who I am … and because I still can.”
We should all be grateful.  Rock on Brenda.

Here’s a link to “Rockin’ Around The Christmas Tree.”  As I noted.  ‘Tis the Season.  Enjoy!
https://www.youtube.com/watch?v=Idl-K8s1GYo
Share A Writer’s Moment with a friend by clicking g+1 below.
Posted by A Writer's Moment by Dan Jorgensen at 6:26 AM