Taking the reader 'into the mysterious'

“When I started writing, I was a great rationalist and believed I was absolutely in control. But the older one gets, the more confused, and for an artist I think that is quite a good thing: you allow in more of your instinctual self; your dreams, fantasies and memories. It's richer, in a way.” – John Banville

Irish writer John Banville, born on this day in 1945, has been labeled "one of the most imaginative literary novelists writing in the English language today" by The Washington Post, which also termed him “Ireland’s Wordsmith.”

Considered a serious contender for the Nobel Prize in Literature, Banville has already won numerous awards, including The Booker Prize for The Sea and the Guinness Peat Aviation Award for The Book of Evidence. In 2011, Banville was awarded the Franz Kafka Prize, and in 2013 the Irish PEN Award, both for his life’s body of work.

Sometimes termed “a dark writer,” Banville's stated  ambition is to give his prose "the kind of denseness and thickness that poetry has.”  Banville also is a noted crime writer (as Benjamin Black), and a journalist -- writing for The New York Review of Books, The Irish Press and 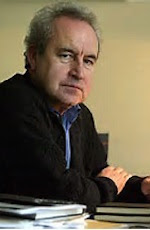 The Irish Times, where he became literary editor in 1998.

Considered by critics as a master stylist of English, his writing has been described as perfectly crafted, beautiful, and dazzling.   David Mehegan of the Boston Globe calls him "one of the great stylists writing in English today.  Banville himself said that he is "trying to blend poetry and fiction into some new form.”

“I want my art to make people look at the world in a new way,” he said.   “I mean, what's the point of the art of writing if it doesn't take you into the mysterious?”
Share A Writer’s Moment with a friend by clicking g+1 below.
Posted by A Writer's Moment by Dan Jorgensen at 5:51 AM