'Crying out' through your writing

“The role of a writer is not to say what we all can say, but what we are unable to say.” – Anais Nin

Born in France on this date in 1903, Anais Nin gravitated to writing at a very early age and started keeping detailed journals at the age of 11.  She didn’t stop until more than 60 years later at the time of her death, and much of what she kept in them became fodder for her long and impressive writing career.

Over her lifetime she wrote everything from essays to novels, critical studies to short stories and, of course, her well-known and often controversial takes on erotica.  Nin's most important works, in the judgment of both herself and scholars, are those diaries and journals, which provide a deeply explorative insight into her personal life and relationships.   So far 16 volumes of her journals have been published. “My ideas,” she once said, “usually come not at my desk writing but in the midst of living.”  And, of course, she wrote down daily about the life that she lived. 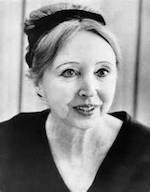 In the mid-1970s, shortly before her 1977 death, she was asked at one of her presentations what should be the motivating factor for someone seeking to make a life as a writer.  Her answer was simple:   “If you do not breathe through writing, if you do not cry out in writing, or sing in writing, then don’t write, because our culture has no use for it.”

Share A Writer’s Moment with a friend by clicking g+1 below.
Posted by A Writer's Moment by Dan Jorgensen at 6:13 AM