The responsibility for 'action'

“I have fallen in love with the imagination. And if you fall in love with the imagination, you understand that it is a free spirit. It will go anywhere, and it can do anything.” – Alice Walker
Today is the birthday of Alice Walker, American author and activist who wrote the critically acclaimed novel The Color Purple (1982) for which she won the National Book Award and the Pulitzer Prize for Fiction.

Walker says she was born to write.  “My mother says I was writing before I was crawling. I wrote in the dirt with a twig,” she said.  “I started writing as a child. But I didn't think of myself actually writing until I was in college. And I had gone to Africa as a sophomore or something - no, maybe junior - and wrote a book of poems. And that was my beginning. I published that book.”
Born and raised in Georgia, she grew up with “an oral story tradition" and chose to write them down, collecting stories in her private journals for many years.  A standout student all through school, she won a full scholarship to Spelman College – a traditional Black institution in Atlanta – and then transferred to Sarah Lawrence where she had that first book of poetry published in her senior year. 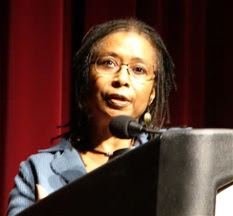 After spending time right out of college working for the Civil Rights Movement, she began her professional writing career on Ms. magazine where she won acclaim as a journalist to accompany her creative writing.   And she has continued a lifetime of activism, supporting the oppressed and downtrodden around the globe.

"Artists have a responsibility to speak and to act when governments fail,” she said,  “and if we don't do that, we really deserve the world we get.”

Share A Writer’s Moment with a friend by clicking g+1 below.
Posted by A Writer's Moment by Dan Jorgensen at 5:35 AM