To be entertained and inspired

“All I wanted to do was read, to be told stories. Stories were full of excitement and emotions and characters that entertained and often inspired.” – Cynthia Voigt
Voigt, born this day in 1942, wrote the best-selling and award-winning Young Adult books, Homecoming and Dicey’s Song – the latter of which won the Newbery Medal for excellence in American children's literature.  Voigt also received the Margaret Edwards Award from the American Library Association recognizing her contribution in writing for teens.

A Massachusetts native, she found herself drawn to writing at an early age.  “By the time I started high school, I knew I wanted to be a writer,” she said.  After college, she went to work in advertising, and then was a teacher in both New Mexico and Maryland before writing Homecoming, the first in what became known as The Tillerman Cycle (a 7-book series about the 4 Tillerman Family kids).  In the mid-1990s it also was made into a movie by the same name.

While she has had much success with her writing, Voigt said the words don’t always “flow” from her imagination. 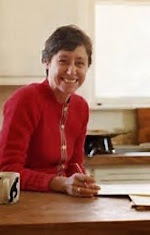 “I do have trouble starting books. I have ideas that I have trouble starting to write. But I'm the kind of person who tends to finish everything she starts out of sheer stubbornness.”  Thankfully, perserverance is her forte’, and the results have give us some of America’s best Young Adult literature.

Share A Writer’s Moment with a friend by clicking g+1 below.
Posted by A Writer's Moment by Dan Jorgensen at 5:57 AM