“I have never been bored an hour in my life. I get up every morning wondering what new strange glamorous thing is going to happen and it happens at fairly regular intervals.” – William Allen White

Born on this day in 1868, White became America’s most renowned small town newspaper editor.  Along the way, he joined with Theodore Roosevelt to become a leader of the “Progressive” movement – something we’re hearing a lot about again today as politicians maneuver for something to help them stand out in the crowded primary field.   A two-time Pulitzer Prize winner and best-selling author, White became the iconic spokesperson for Middle America and his hometown of Emporia, Kansas, a “must stop” place when political leaders and celebrities were traveling across the U.S.

When I was researching background for my novel And The Wind Whispered, I was startled to see that in his younger days he traveled to the Black Hills and spent time in the community in which my book was set.  Thus, he and his wife Sallie became an integral part of my tale’s narrative.   I was struck by how that trip – and his meeting with Roosevelt while there – may have had some influence on his journalism and political thought.  He felt Roosevelt embodied America and was greatness personified.   “Greatness, generally speaking,” he said, “is an unusual quantity of a usual quality grafted upon a common man.”

A few months ago, I was invited to be part of the Writers’ Series at Emporia State University and in the process visited the famed Emporia Gazette to see first-hand the place from which White wrote so many pieces that helped make life better for the average American.
The William Allen White office at The Emporia Gazette 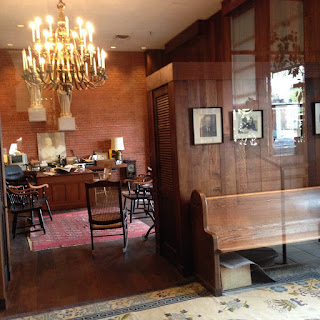 As he neared death in 1944, White wrote of how grateful he was to have lived and worked in America, and he said he looked forward to every day regardless of what it might bring.  “I am not afraid of tomorrow,” he said, “for I have seen yesterday, and I love today!”

Share A Writer’s Moment with a friend by clicking g+1 below.
Posted by A Writer's Moment by Dan Jorgensen at 5:22 AM