Writing as art ... and craft

“Writing is no dying art form in America because most published writers here accept the wisdom and the necessity of encouraging the talent that follows in their footsteps.” –  Elizabeth George
On the occasion of her 67th birthday today, I thought sharing a few more musings of the great mystery writer Elizabeth George was not only more than merited, but almost required.  I’ve written about George before, but she’s such a fascinating person and writer, that I couldn’t resist sharing more about her and her work.

The creator of an amazing 19 novels about British Inspector Thomas Lynley, George has often been mistaken as British herself.  But she’s American through and through, having been born in Warren, OH, where her mother was a nurse and her father a factory foreman.  Then she grew up in San Francisco after her father grew tired of shoveling snow and moved the family out west.

George studied English in college and was teaching English when she first came up with the idea for her British detective and wrote the first novel in the series, A Great Deliverance.  That 1988 book won every major mystery writing award and catapulted her into the career that gave us all those Lynley books plus 7 stand-alone titles, including the just released The Edge of the Light.

Ever a teacher, she shares with writing groups and audiences everywhere. 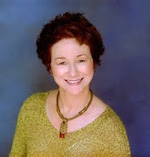 “I find it both fascinating and disconcerting when I discover yet another person who believes that writing can't be taught,” she said.  “Frankly, I don't understand this point of view.
“Art can't be taught; passion can't be taught; discipline can't be taught; but craft can be taught. And writing is both an art and a craft.”
Share A Writer’s Moment with a friend by clicking g+1 below.
Posted by A Writer's Moment by Dan Jorgensen at 5:36 AM