“I think young writers should get other degrees first, social sciences, arts degrees or even business degrees. What you learn is research skills, a necessity because a lot of writing is about trying to find information.” – Irvine Welsh
Born on this day in 1957, Scottish novelist, playwright and short story writer Welsh is perhaps best known for his novel Trainspotting, also made into a critically acclaimed  film.   His work often depicts the “mean streets” of his native home of Edinburgh, where he grew up the son of a dock worker and waitress.

After dropping out of high school, he tried his luck at a variety of jobs before getting into the London music scene, where for a time he thought his success might rest with writing songs.  But it was while telling some of the tales of his childhood and upbringing that he was encouraged to start writing down some of those stories and that led to his writing Trainspotting.   He returned to school, worked on several degrees and finished the book.

Despite being lambasted by some as “too mean,” it became an almost instant success and started him on his writing path.  And in response to what he was writing, he said, “The first job of a writer is to be honest.”
Since then (1993), he has written 9 novels 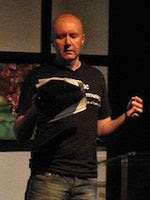 – several following his first group of characters –  a number of books of short stories, and several plays and screenplays.    He’s also directed several short films.  Welsh's writing is dominated by the question of working class and Scottish identity in the period spanning the 1960s to the present day.

“Writing,” Welsh said,  “is about culture, and should be about everything. That's what makes it what it is.”

Share A Writer’s Moment with a friend by clicking the g+1 button below.
Posted by A Writer's Moment by Dan Jorgensen at 8:47 AM