“Without discipline, there's no life at all.” – Katharine Hepburn
Known for her fierce independence and spirited personality, Hepburn was a leading lady in Hollywood for more than 60 years. She appeared in a range of genres, from screwball comedy to literary drama, and she received four Academy Awards for Best Actress — a record for any performer. 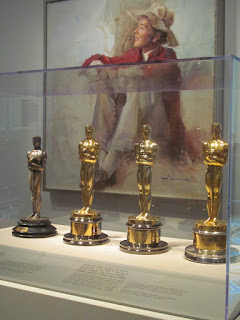 On a recent visit to the National Gallery in Washington, DC, we found this display of both the 4 Oscars AND one of her favorite portraits.  So I felt compelled to snap this photo and to write a few words about this marvelous actress, who also was a bestselling author for her 1991 autobiography Me: Stories of my Life.   The book topped bestseller lists for over a year.

In 1999, Hepburn was named by the American Film Institute as the greatest female star of Classic Hollywood Cinema.  Also a Kennedy Center recipient and Film Institute Hall of Fame inductee, she was named in a number of books and magazine lists among the most influential women of the 20th Century.  Hepburn died at age 96 in 2003.

In her later life, she once remarked, “For me, prizes are nothing. My prize is my work.”

Share A Writer’s Moment with a friend by clicking the g+1 button below.
Posted by A Writer's Moment by Dan Jorgensen at 7:03 AM