Paying attention -- it's what we do

“…As writers, paying attention is what we do. We are scribes to the ticking of the days, and we have a job to do. We are not at peace unless we are doing it.” – Larry Brooks

Brooks is the author of Story Engineering, Story Physics, and Story Fix, and also the creator of the fiction-writing craft site, Storyfix.com.  He speaks frequently at conferences and workshops, which is where we met last month when we both spoke at the Historical Writers of America Conference in Williamsburg, VA.    We also shared a table at an authors’ autographing session there, where I had the chance to pick his brain about his take on the writing craft during the 3-hour session. 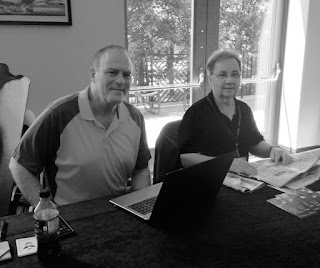 In addition to his speaking, work as a writing instructor, and freelance writing, the Phoenix-based Brooks is critically acclaimed for his six psychological thrillers, including Darkness Bound, Pressure Points, and Serpent’s Dance.

He likes to reference the First Plot Point (also referred to as "The Moment of No Return," or "Call to Action") as a focal point for writers, especially those who are still learning their craft.

“It's more than a story twist—it's the transition between the story's setup and the launch of the hero's core dramatic journey, and it has a specific mission in terms of how it changes the story, along with criteria that make it work,” he said.  “Mess this up, and the story will suffer in a potentially drastic way.”

Share A Writer’s Moment with a friend by clicking the g+1 button below.
Posted by A Writer's Moment by Dan Jorgensen at 6:01 AM