“All fiction has to have a certain amount of truth in it to be powerful.” – George R. R. Martin


Best known for his series of novels that have led to the epic HBO production, Game of Thrones, Martin has had a long and extremely interesting career, writing both novels and short stories in the fantasy, horror, and science fiction genres.  Also a screenwriter, television producer and longtime writing teacher, he said he intended the Game of Thrones series to be 3 books.  That was in 1991 when he first started them, and now he’s hard at work trying to finish the 6th and 7th installments – all very long, extremely good, and wonderfully complex.

Born on this date in 1948, Martin grew up in New Jersey but said his voracious appetite for all kinds of stories and books made him a citizen of the world and of history.  He said just as he used to lose himself in the books he was reading, he finds a similar effect from his own writing.

“The odd thing about being a writer is you do tend to lose yourself in your books. Sometimes it seems like real life is flickering by and you're hardly a part of it. You remember the events in your books better than you remember the events that actually took place when you were writing them.
The winner of some two dozen major national and international writing awards, Martin said he has many, many files of ideas that he hopes to get to once he has completed his massive Game of Thrones opus.   As to advice to new writers:
“Start with short stories,” he advises. 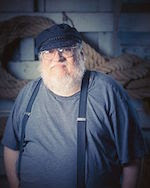 “After all, if you were taking up rock climbing, you wouldn't start with Mount Everest. So if you're starting fantasy (or any genre), don't start with a nine-book series.”

Share A Writer’s Moment with a friend by clicking the g+1 button below.
Posted by A Writer's Moment by Dan Jorgensen at 12:39 PM