“Forget market or publishers or whatever. Just write with fire and joy, and in my own experience, those are the stories of mine people have wanted to read.” – Patrick Ness

Ness, whose 45th birthday is today, is the son of a U.S. Army officer who grew up in several different states and then emigrated to Great Britain.  There, he has become  an award-winning author, journalist and lecturer.  He is best known for his books for young adults, including the Chaos Walking trilogy and Monsters of Men and A Monster Calls, back-to-back winners of the prestigious Carnegie Medal from the Association of British Librarians.

While he also has written a number of adult books, it’s his young adult fiction that’s most popular, including among adults.  “I think the reason teenage fiction is so popular with adults is that adults hunger for narrative just as badly as teenagers do.” Ness said.
A Monster Calls is a unique book in that the original idea for it 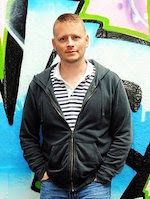 came from author Siobhan Dowd, who was gravely ill at the time she developed it and asked Ness to do the writing and artist Jim Kay to illustrate it.  The result was a massive best seller that not only won the Carnegie for Ness but also the Kate Greenaway Medal for the art – the first time one novel has won both major awards.  To cap everything off, Ness also did a screenplay for a popular BBC movie with the same name.
Ness has this advice for writers trying to determine how to craft their books.  “A book cannot apologize for what people may think it should be. It has to be authoritative. That's what I want as a reader - I want to be confident that the book will do its job.”

Share A Writer’s Moment with a friend by clicking the g+1 button below.
Posted by A Writer's Moment by Dan Jorgensen at 7:01 AM