“Endings are the toughest, harder than beginnings. They must satisfy the expectations you have hopefully generated in your reader - not frustrate them, leave the reader grasping at elusive strings.” - Jeffrey Thomas
Thomas, born on this date in 1957, is a prolific writer of science fiction and horror, best known for his stories set in a nightmarish future city called Punktown.  The stories tend to feature common citizens as their protagonists, rather than the larger-than-life heroes of cliché science fiction, with few characters recurring.  The one exception is a mutant private eye named Jeremy Stake, protagonist of several novels, including Deadstock and Blue War, two of his most popular.

Besides numerous appearances of his short fiction in magazines and anthologies, there have also been foreign language editions of several of his Punktown books released in Germany, Russia, Poland, and Greece.
“I've polished up stories for their reprinted 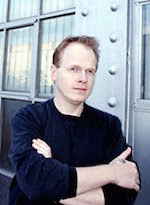 appearances. I guess there's always something to be changed or improved,” Thomas noted.  “But one could get carried away and work on one story indefinitely. I'm too restless for that, too eager to begin the next one.”

Share A Writer’s Moment with a friend by clicking the g+1 button below.
Posted by A Writer's Moment by Dan Jorgensen at 7:49 AM