The start of Happy Trails

“When a man ain't got no ideas of his own, he'd ought to be kind o' careful who he borrows 'em from.” – Owen Wister
Wister, a Harvard classmate and close friend of Theodore Roosevelt, is often called “The father of the Cowboy novel,” a title given to him after he wrote The Virginian.
On our current trip to Wyoming, Montana and Idaho, we had the good fortune to tromp over a lot of ground that Wister tromped across when gathering background for that famous book – often running across photos and quotes from him in hotels and on ranches where he visited.

Wister began his literary work in 1891 after spending several summers in the West, making his first trip to Wyoming in 1885.   Like Roosevelt, Wister was fascinated with the culture, lore and terrain of the region.   In the historical museum at the north end of Yellowstone National Park, we found information about his 1893 visit there, where he met the great Western artist Frederic Remington and began a lifelong friendship.

The Virginian, written in 1902, is the story of a cowboy who is a natural aristocrat.  Set against a highly mythologized version of Wyoming’s Johnson County War, it takes the side of the large landowners.  Wildly successful, it was reprinted a remarkable 14 times in its first 8 months alone and has continuously been in print ever since.   All told, Wister wrote 8 novels, 13 nonfiction books – including one about his friendship with Roosevelt – 6 story collections, including The West of Owen Wister: Selected Short Stories, published posthumously.  He also authored numerous essays and poems, several plays and even a number of operas.

Visiting Johnson County, which also is regarded as the base for Craig Johnson’s modern day series of novels and TV series Longmire, was a terrific experience – including reading Wister’s handwritten comments posted on a wall of “famous visitors” in the historic Occidental Hotel in downtown Buffalo, the county seat. 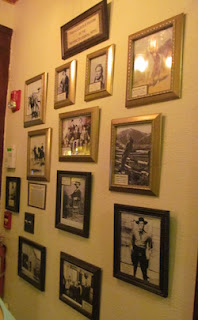 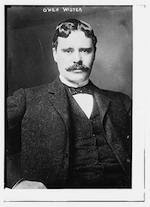 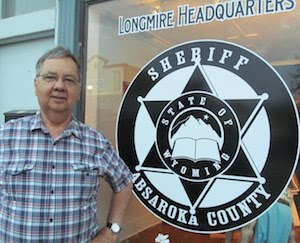 The Wall of Famous Old West Visitors in the Occidental Hotel; Wister's portrait in 1905; & stopping at “Longmire” headquarters, just down the street from the Occidental in Buffalo, WY.

Share A Writer’s Moment with a friend by clicking the g+1 button below.
Posted by A Writer's Moment by Dan Jorgensen at 7:33 AM