Driven By Her Story

“From the beginning, when I first got an idea for a story and wondered if I could write it, it has always been the story that has driven me.” – Jean M. Auel

Born in Chicago on this date in 1936, Auel is best known for her Earth's Children books, a series of novels set in prehistoric Europe that explores interactions of Cro-Magnon people with Neanderthals.

Thought at the time of their publication to be “fantasy” or “science fiction” or a combination of the two, it turns out that the interaction that Auel imagined has quite a few elements of truth as recent scientific discoveries show that we all probably carry some Neanderthal DNA.

After she got the initial idea to explore her premise of the interactions of Cro-Magnons and Neanderthals, she began extensive library research of the Ice Age for her first book Clan of the Cave Bear, published in 1980.  She joined a survival class to learn how to construct an ice cave, and learned primitive methods of making fire, tanning leather, and knapping stone.  It’s that attention to historic and day-in, day-out “detail” that captivates her readers and has won her numerous writing accolades, not only for that book but also for the 5 others that followed.  To date her books have sold some 50 million copies worldwide.

“I can't tell you any more than any other writer can tell you why they write, and I don't know
what my influences are,” she said, adding that 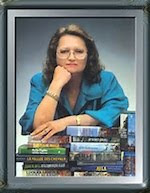 she reads and reads and reads, honing her own terrific storytelling style by observing the countless efforts of others.  “I probably read 100 times more than I write, but that way when I move my characters through it, I know.”

Posted by A Writer's Moment by Dan Jorgensen at 5:34 AM