'A Devotion to Language'

“I have a theory... that someplace at the heart of most compelling stories is something that doesn't make sense.” – Richard Ford

Born in Mississippi on this date in 1944, Ford is novelist and short story writer best known for his novels The Sportswriter and its sequels, Independence Day (winner of the Pulitzer Prize), The Lay of the Land, and Let Me Be Frank With You.

A one-time student of E.L. Doctorow (while earning his MFA at the University of California-Irvine) Ford taught for a time at Williams and Princeton before writing for the magazine Inside Sports.  When that magazine shut down, he crafted the widely successful The Sportswriter and his creative writing career was off and running.

Ford said he has a  “devotion to language” and described his sense of language as "a source of pleasure in itself—all of its corporeal qualities, its syncopations, moods, sounds, the way things look on the page.” 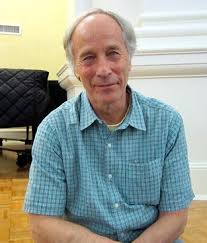 In addition to the Pulitzer, he’s won numerous other writing awards including the PEN/Faulkner and PEN/Malamud (for short fiction) and the 2019 Library of Congress Prize for American Fiction.   To date he’s written 8 novels, 6 short story collections, a play and a memoir as well as contributing to many other works.

“In order to write novels for a living - it's not pathological,” he said,  “but I do think and worry and brood and fidget about stuff that I'm working on.”

Posted by A Writer's Moment by Dan Jorgensen at 6:24 AM