“Because we are all of an oral tradition in our beginning histories, the voice of the poet in this particular society will be heard.” – John Trudell

Born in Omaha on this date in 1946, Trudell was a Native American (Santee Dakota) author, poet, actor, musician, and political activist. During most of the 1970s, he served as the chairman of AIM, the national American Indian Movement.

Most of his writing revolved around his poetry and many of those pieces are included in his 2008 book Lines From a Mined Mind: The Words of John Trudell, a collection of 25 years of poetry, lyrics and essays. 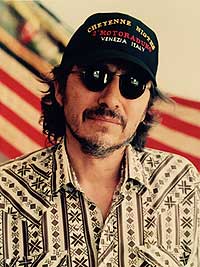 While Trudell’ writing career began as a poet, he is perhaps best known for his songwriting and performing as both an actor and singer.  Trudell often used his poetry as lyrics for recordings setting them to traditional American Indian music, which eventually led to his best-selling album A.K.A Graffiti Man.  He wrote for and performed on two dozen albums.

Posted by A Writer's Moment by Dan Jorgensen at 5:32 AM