Born in England on this date in 1961, Asher has established himself as one of today’s top science fiction writers – something he “sort of inherited” from his parents, both who are educators and science fiction fans. 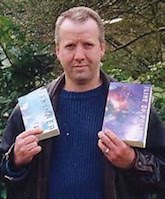 Asher has turned out dozens of books and short stories – many of them award winning – since his debut piece in 1989.   His advice to new writers is to work on developing a regular writing routine (that 2000 daily words mentioned above) and keep an active, inquiring mind.  "For me," he said, "the writing process is the same as the reading process.  I want to know what happens next."