“If you're a writer, you know there are ways in which we don't know what we're doing at all. We're working out mysteries in a sort of poetic realm, and hoping that if a story is honest, if you're dragging the deep truth out of yourself, then something good and profound might come out of it.”—Colum McCann

Born in Dublin, Ireland on this date in 1965, McCann is the author of seven novels and three collections of stories.  He has been the recipient of many international honors, including the National Book Award, the International Dublin Impac Prize, and the Chevalier des Arts et Lettres from the French government. His topics have ranged from homeless people in the subway tunnels of New York, to a poetic examination of the life and culture of the Roma in Europe. 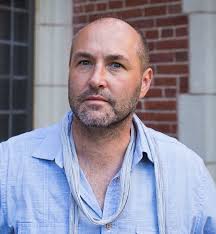 Perhaps his best-known book is Let the Great World Spin, winner of the National Book Award in the U.S, Best Foreign Novel Award in China, and the International Impac Award, a literary award from the American Academy of Arts and Letters.  His work has been published in over 40 languages.

Co-founder of the non-profit global story exchange organization, Narrative 4, he lives with his wife and family in New York City where he teaches at the MFA program in Hunter College.

“In a certain way, novelists become unacknowledged historians, because we talk about small, tiny, little anonymous moments that won't necessarily make it into the history books.”