Muriel Rukeyser (1913-1980) was an American poet and political activist, best known for her poems about equality, feminism, and social justice.    Critic and fellow poet Kenneth Rexroth once
said that she was the greatest poet of her "exact generation.” 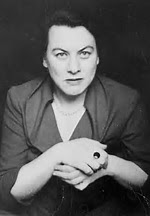 So immersed was she in writing poetry that she noted,  “If there were no poetry on any day in the world, poetry would be invented that day. For there would be an intolerable hunger.”

Long afterward, Oedipus, old and blinded, walked the
roads. He smelled a familiar smell. It was
the Sphinx. Oedipus said, 'I want to ask one question.
Why didn't I recognize my mother?' 'You gave the
wrong answer,' said the Sphinx. 'But that was what
made everything possible,' said Oedipus. 'No,' she said.
'When I asked, What walks on four legs in the morning,
two at noon, and three in the evening, you answered,
Man. You didn't say anything about woman.'
'When you say Man,' said Oedipus, 'you include women
too. Everyone knows that.' She said, 'That's what
you think.'

Share A Writer’s Moment with a friend by clicking g+1 below.
Posted by A Writer's Moment by Dan Jorgensen at 5:56 AM