January 28th marked the 30th anniversary of the explosion of the Challenger shuttle.  In the disaster’s immediate aftermath, President Ronald Reagan addressed the nation and used the closing lines from the poem “High Flight” as a tribute to the 7 astronauts who lost their lives.

The poem was written by American aviator John Gillespie Magee, Jr., who died in 1941 while serving in the Royal Canadian Air Force in England.  Impatient for the U.S. to assist the British, he signed up to fight for Canada and was killed in a mid-air collision after a dogfight with German Luftwaffe fighters.   Lines from his beautiful poem are printed on his tombstone in Lincolnshire, England, where he was buried with full British honors.  He wrote the poem just weeks before his death and sent it to his parents in a final letter home.
John Gillespie Magee, Jr. 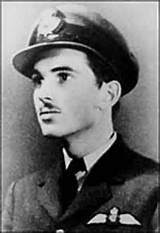 After his father, Curate of Saint John's Episcopal Church in Washington, DC, reprinted it in church publications, Archibald McLeish, the Librarian of Congress, included it in a 1942 exhibition of poems called "Faith and Freedom," and it became widely known.   Here, for Saturday’s poem is “High Flight.”

High Flight
"Oh! I have slipped the surly bonds of Earth
And danced the skies on laughter-silvered wings;
Sunward I’ve climbed, and joined the tumbling mirth
of sun-split clouds, — and done a hundred things
You have not dreamed of — wheeled and soared and swung
High in the sunlit silence. Hov’ring there,
I’ve chased the shouting wind along, and flung
My eager craft through footless halls of air....

Up, up the long, delirious, burning blue
I’ve topped the wind-swept heights with easy grace.
Where never lark, or even eagle flew —
And, while with silent, lifting mind I've trod
The high untrespassed sanctity of space,
- Put out my hand, and touched the face of God."

Share A Writer’s Moment with a friend by clicking g+1 below.
Posted by A Writer's Moment by Dan Jorgensen at 6:21 AM