The worlds of imagination

“Whenever you're writing a book or creating a movie or a game, your first task is to get the reader/audience/player to suspend disbelief, to buy into the logic and boundaries of your world, even though those boundaries might include things like dragons and magic. To do that, you need long threads - of history and culture.” – R.A. Salvatore

Robert A. Salvatore, born on this date in 1959, is an American author best known for The DemonWars Saga, his Forgotten Realms novels, and Star Wars: The New Jedi Order, a series of novels set in the Star Wars expanded universe.   He has sold more than 15 million copies of the books in the United States alone, and 22 of his titles now have been New York Times best-sellers.  On top of that, he has been highly successful writing the backstories and text for a number of science fiction-type video games.

The youngest of a family of seven, he credited his high school English teacher with being instrumental in his development as a writer. During his time at Fitchburg State College (Virginia), he became interested in fantasy after reading J. R. R. Tolkien’s The Lord of the Rings, given to him as a Christmas gift.  He quickly changed his major from Computer Science to Journalism/Media and took up writing fantasy type stories.  Right out of college and before becoming a full-time writer in the early 1980s, he worked as a bouncer, and attributes his fierce and vividly described battle scenes to that experience (always write what you know, right?). 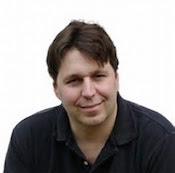 “I never intended to be a professional writer,” he said.  “As the story (his first novel Echoes of the Fourth Magic) developed, the one thing I had in my hopes was that this would be something tangible to separate me from the nameless, numbered masses.  I loved the world of imagination.”

Share A Writer’s Moment with a friend by clicking g+1 below.
Posted by A Writer's Moment by Dan Jorgensen at 6:57 AM