Stepping away from the corner

“I suppose that every one of us hopes secretly for immortality; to leave, I mean, a name behind him which will live forever in this world, whatever he may be doing, himself, in the next.” – A.A. Milne

Milne, born this day in 1882, achieved that immortality by creating both a character and dozens of sayings from that a “silly old bear” that will, indeed, live on forever.  While Winnie-the-Pooh is his legacy, Milne was an amazing writer in many other ways, doing some two dozen plays, hundreds of essays, novels, short stories and poems.

But, of course, Milne is most famous for his Pooh books about a boy named Christopher Robin (after his son, Christopher Robin Milne) and various characters inspired by his son's stuffed animals.  Christopher 's toy bear, originally named "Edward,” was renamed Winnie after a Canadian black bear that father and son enjoyed visiting at the London Zoo.

Christopher’s other stuffed animals – Piglet, Eeyore, Kanga, Roo and Tigger – were incorporated into Milne's stories, and two more characters - Rabbit and Owl - were created by his imagination. Those famous toys are now under glass in New York City where 750,000 people visit them every year. 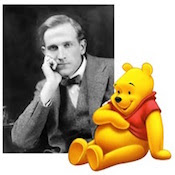 One of Winnie’s famous lines – and there are many – came from advice Milne first gave his young son.  “You can't always stay in your own corner of the forest waiting for others to come to you,” he said.  “Sometimes, you have to go to them.”

Share A Writer’s Moment with a friend by clicking g+1 below.
Posted by A Writer's Moment by Dan Jorgensen at 5:20 AM