"Our task as fiction writers isn't just to report something that didn't really happen.  We have to give what we write a sense of reality.  The tool of our tradition is language." -- Alice McDermott

Novelist and essayist McDermott, born on this date in 1953, is a professor at Johns Hopkins University, only the latest in a number of colleges and universities where she has either taught or been writer-in-residence across the United States.  Her 1998 novel Charming Billy won both the American Book Award and the U.S. National Book Award for Fiction, and her 2013 novel Someone was a National Book Award finalist.  Two of her other books were finalists for the Pulitzer Prize.

A native of New York City, she started writing while still in high school, and in 2013 she was inducted into the New York Writers Hall of Fame.  Currently residing near 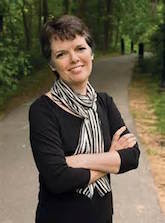 Washington, DC, she has written half-a-dozen novels and dozens of short stories and essays for Ms., Redbook, Mademoiselle, The New Yorker, and both The New York Times and The Washington Post.

But, ultimately, she said, “I'm a novelist. I'm not a crusader, and I'm not an editorial writer. And I'm not writing fiction to convince anybody of anything ...  I've always believed that you go to literature to find the shared human experience."

Share A Writer’s Moment with a friend by clicking g+1 below.
Posted by A Writer's Moment by Dan Jorgensen at 6:16 AM