Notes on 'The Amazing Nellie Bly'

“On the wagon sped, and I, as well as my comrades, gave a despairing farewell glance at freedom as we came in sight of the long stone buildings.” – Nellie Bly

That quote came from the beginning of one of the most harrowing experiences a writer can put herself into – undercover reporting in a dangerous setting.  And while it marked the start of a two-week living nightmare, it also would catapult her into the role of the most famous reporter of her day.

Born Elizabeth Jane Cochran on this day in 1864, Bly not only set the standards for how undercover journalism should be done, but also excited the nation’s imagination with the things she was willing to do to “get the story and bring the truth to the world.”

The opening quote above came from her smuggled notes out of the infamous Blackwell’s Island, a New York insane asylum. Her reporting blew the lid off the terrible ways the inmates were treated and led to vast reforms.  It was just the first of many things that this diminutive and imaginative reporter would do, including traveling around the world alone to break the record of the fictional Phileas Fogg in Jules Verne’s book Around The World in 80 Days.  She did it in just over 72. 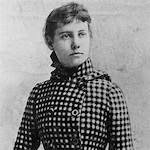 Bly is a key character in my historical novel And The Wind Whispered, and I strived to keep her “character” true to the reality of this amazing reporter.  “Accept praise for it’s worth – politeness,” Bly said.  “And, be brutally frank with yourself.  It’s safer.”

Share A Writer’s Moment with a friend at http://writersmoment.blogspot.com
Posted by A Writer's Moment by Dan Jorgensen at 5:27 AM