“I love the fact that you collaborate with your readers when you write a book.” – Robert Crais
Born on this day in 1953, Crais is one of America’s best-selling authors of crime fiction, but he didn’t start to create novels in the genre until long after he already had made a name for himself as the writer of scripts for television shows.   After graduating from LSU, he moved to Hollywood and jumped right into writing for shows like Hill Street Blues and Cagney and Lacey.

But in the late 1980s he tested the waters with his first novel, The Monkey’s Raincoat, an instant hit with readers and critics alike – earning everything from “best first novel” to “best mystery.”  Since then, he’s had 20 novels, published in 62 countries, all worldwide bestsellers.    In 2006 he received the Ross Macdonald Literary Award (for crime fiction) and in 2014 he was named a Grand Master by the Mystery Writers of America. 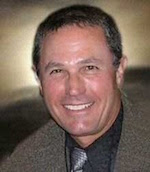 “My books come to me in images,” he said about his inspiration.  “Sometimes the image is at the beginning of the book, and sometimes it's simply a flash somewhere in the middle.”  Whatever and whenever, it definitely works, built around his two memorable main characters – Elvis Cole and Joe Pike.

Perhaps his best-known novel, also made into a movie, is Hostage, cited for the great character development throughout.   “I write characters and stories that move me,” he said, “and I write from the heart.”

Share A Writer’s Moment with a friend by clicking the g+1 button below.
Posted by A Writer's Moment by Dan Jorgensen at 5:09 AM